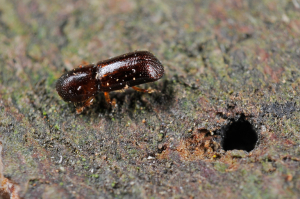 The Red Bay Ambrosia Beetle (Xyleborus glabratus) originates from Asia and the South Pacific. Officials believe the beetles entered the United States in untreated wood packing material, such as crates or pallets. These small, cylindrical bugs are typically no more than 2 mm long, making them hard to detect or identify, and which shows how easily they can lodge themselves into any lumber. When tunneling into trees, this beetle introduces deadly Laurel Fungus spores into the tree’s tissues. The fungus is found in the “teeth” or mandibles of the beetle, which is then transmitted to the tree and eventually kills it.

These beetles can infect and kill a wide variety of trees, thereby posing a significant threat to our economy and ecosystems. In the Everglades region of Florida, the beetle has already infested 300,000 acres of wetland forests, threatening the multi-billion dollar ecosystem restoration effort that had been going on for decades. Although first seen on east coast locations in the US, the national distribution of wood packing material, firewood, and lumber has caused the beetle to spread all over the country, especially in California, where avocado harvests are in severe danger of being diminished because of the Laurel Fungus this beetle carries.