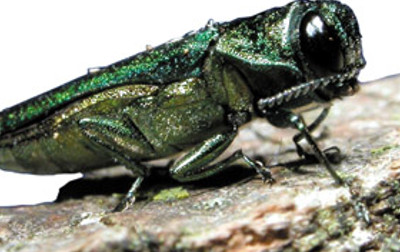 The Emerald Ash Borer (scientific name: Agrilus planipenni) was introduced accidentally into Michigan in packing material from Asia in 2002. It has infested forests in the Midwest, New England, and Southeastern states, and is moving into the Great Plains. It is a serious threat to forests in general, and is particularly damaging to ash trees.

The USDA estimates the beetle has already killed tens of millions of ash trees, especially in the Midwest, including Illinois; Chicago may have to remove as many as 10,000 trees in a a fight against the Emerald Ash Borer.

“Ninety-nine percent of the ashes in North America are probably going to die,” said Andrew M. Liebhold, a research entomologist with the United States Forest Service. To tackle the emerald ash borers, scientists have experimented with chemical traps. More recently, scientists in New Hampshire have experimented with bringing Oobius agrili, a type of parasitic wasp, into the borer’s habitat. The wasps burrow into trees and eat borers and their eggs.

The emerald ash borers’ effect may not be as dire as Dr. Liebhold predicts. Dr. McCullough, the entomologist at Michigan State, noted that the bugs’ conquest varied by tree species and location. Of the four major species, black ash and green ash are probably lost, but the beetles kill only 60 percent to 70 percent of blue ash. White ash falls somewhere in between.