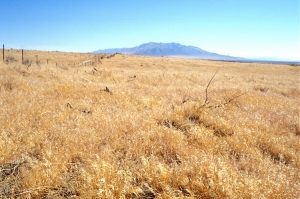 Cheat Grass- (Bromus Tectorum), also known as drooping brome, is a weed native to Europe, West Asia, and Northern Africa. It initially came to North America via ships with contaminated grain seed, soil, and other organic material. First seen in North America in 1861, Cheat Grass spread throughout the US by 1928, but is now mostly seen in the West.  It gets its name from the fact that by consistently turning brown early in the growing season it “cheats” cattle of forage.Cheat Grass grows on ranges, pastures, hills, prairies, and sites of previous soil disturbance. With its deep, intricate root system, it can grow and spread with even small amounts of rainfall. Droughts may kill native vegetation, but do not stop cheat grass from spreading. Its deep roots reduce soil moisture to the permanent wilting point deep into the ground, which diminishes the quality of the soil, and prevents other plants from being able to grow. Cheat Grass is also self-germinating, and does not require much soil to grow. These characteristics have threatened native juniper, woodland, and sagebrush plants. Although most of its impact is seen in lower elevations and plains, damage has been reported as high as 13,000 feet above sea level. Cheat Grass’s ability to grow thickly even in unfavorable conditions and turn brown early in the growing season increases the frequency and severity of wildfires.  Cheat grass transforms grassland ecosystems to the point where populations of species like the greater sage grouse have diminished to the extent that they may be listed under the Endangered Species Act.

Recently, the Western Governors’ Association has asked the EPA to register Pseudomonas fluorescens (ACK55), a broad-scale biopestiside agent, to be used in combatting cheat grass. By applying ACK55 to landscapes with high cheat grass concentrations, officials anticipate considerable reduction in risk of wildfire, property damage, habitat, and crop loss. The document in its entirety is available HERE.