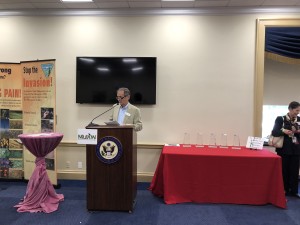 In cooperation with Representatives Mike Thompson (D-CA) and Elise Stefanik (R-NY) as Co-Chairs of the Congressional Invasive Species Caucus, RRISC recently held its Fourth Annual Congressional Reception and Awards Program on Capitol Hill with a crowd of over 100 Congressional and federal agency staff in attendance. Please see below for a complete list of our 2019 awardees.

This year’s award for outstanding state government achievement goes to Bill Whitacre, Policy Analyst for the Western Governors’ Association for his leadership in uniting the Western states in the fight against invasive species. Over the last year, Bill has spearheaded a series of 5 workshops across the West, focusing on data collection and sharing, early detection/rapid response, restoration, land management, and cross-border collaboration. This broad-scale collaboration initiative to explore shared solutions is paying dividends to maximize invasive species prevention efforts across the West in connection with state, local, federal, and tribal entities.

This year’s award for outstanding volunteer achievement goes to John Kabashima for his continued efforts to address shot hole borers across California and the West. Over the last several years, shot hole borers and polyphagous (invasive fungus) threaten 13 native tree species and continued to spread. Noticing insufficient support from the California state legislature, John spearheaded an “Invasive Species Summit” in January 2018 to develop consensus recommendations that conservation organizations would use to lobby state legislatures. This effort, in consultation with John, developed two bills based on the Summit’s recommendations, and retained $5 million to address invasive shot hole borers. While the efforts to maintain funding and awareness continue, John’s excellent, actionable leadership has helped produce important awareness for a pressing invasive species issue.

This year’s award for outstanding achievement by a private sector company goes to Ed Rudberg and Mark Apfelbacher, co-founders of CD3 Station. Their company, based out of Minnesota, has developed 4 different cleaning stations for boaters to clean, drain, and dry their watercraft to prevent the spread of invasive species. Their extensive research and subject matter expertise, coupled with product backgrounds has created both an educational campaign for invasive species best practices and a Waterless Cleaning System for boaters to clean their watercraft when taking out of a water body. With new stations being placed around the country, CD3 is at the forefront of creating behavioral and scientific solutions to prevent the spread of invasive species.

This year’s award for outstanding federal government achievement goes to the USDA Region 6 Invasive Species Team. Over the last 15 years, Region 6 has served as an example for integrated invasive plant treatments and early detection and rapid response. These efforts have resulted in 50,000 acres of invasive plants treated and 42000 acres restored annually. Additionally, Region 6 has developed a robust Aquatic Invasive Species Management Strategy, which coordinates

with law enforcement, fire management, and other entities to prevent the transport of invasive species. Be it boot/brush cleaning stations, training on invasive species identification, or advanced sampling techniques, Region 6 has developed a comprehensive strategy to mitigate invasive species risks.

Resistance is the cornerstone of plant health management, and this is true for both agriculture and forest health management.  Professor Bonello has successfully harnessed the power of spectroscopy to screen trees for resistance to significant invasive diseases, from sudden oak death to chestnut blight, to ash dieback, in a non-destructive and very rapid and efficient manner.  This opens up new routes for the breeding and development of resistant tree stock that can be more rapidly and confidently deployed in conservation and restoration efforts.