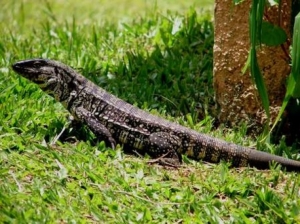 While many believe the Burmese Python is the most troublesome invasive species in Florida, most signs now point to the Tegu Lizard (Tupinambis merianae) as the most significant invasive species in that region. It originally came to North America through the pet trade from its native habitat in South America. Whether thoughtless pet owners simply dumped their former pets into the wild or lazy lizard breeders chose to use the Everglades to farm them, Tegu Lizards have found themselves in the Florida Everglades, where they are thriving.

What makes these lizards so problematic? Compared to the Burmese Python, Tegu Lizards have the ability to expand their range faster and further, and they are not nearly as vulnerable as the snake to occasional winter freezes. They are also aggressive and efficient predators. Wildlife managers have seen Tegu Lizards destroying alligator and American Crocodile nests by eating their eggs and young. They also prey on the endangered Key Largo Wood Rat, Cotton Mouse, and a wide variety of native birds, mammals, and reptiles.