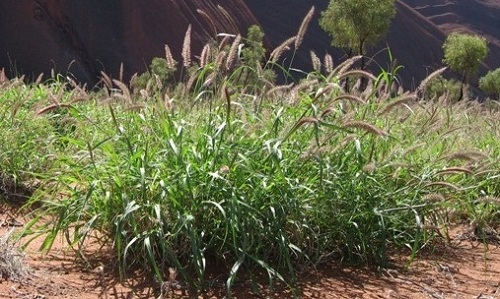 Buffelgrass (Pennisetum ciliare) is a short, shrubby grass found in deserts in the Southwestern United States, notably the Sonoran Desert in Arizona. It often spreads in already-disturbed areas, such as on the side of highways, medians, or cleared agricultural land. It is also found
on steep hillsides near debris cones.
Buffelgrass was first introduced in the US in the 1930’s as livestock forage. The New Deal’s Soil Conservation Service (SCS) experimented with buffelgrass to see if it could improve the health, quality, and consistency of soil. After years of experimentation, the SCS did not find buffelgrass useful and stopped planting it; however, the small amount they did introduce has proliferated considerably since then and now poses a sizeable threat to desert ecosystems.

Buffelgrass is very drought-tolerant, and can survive even the driest of years. Its plants produce leaves and flowers quickly, even after light rainfall, which allows it to flourish in desert environments. It isbecause of this tolerance that buffelgrass can grow in dense stands and persist. Its toughness poses various ecological issues for desert environments. First, its ability to become very dense suffocates and takes water from nearly all native desert plants, riving them out of the ecosystem. Without native plants in these desert regions, various forms of geomorphologic damage take place, such as rapid hillside erosion, mass silt particle movement, and rock falls. Buffelgrass also deteriorates soil quality and makes restoration very difficult, and in some cases, impossible. Finally, when there is an extremely dry year when even buffelgrass cannot spread, it can dry out and be prime fuel for a wildfire, which further damages the desert ecosystem and poses risk to human safety.