From the National Park Service, Department of the Interior

The lingering drought that has dropped water levels along the Colorado River has helped expose large numbers of invasive quagga mussels, revealing that a much bigger problem exists in Arizona’s Lake Powell than previously thought.

The National Park Service today said an extensive survey of quagga mussels in the lake at the Glen Canyon National Recreation Area found thousands of the invasive mollusks along exposed shorelines and attached to canyon walls, boats, docks and other underwater structures, mostly on the lower end of the lake. 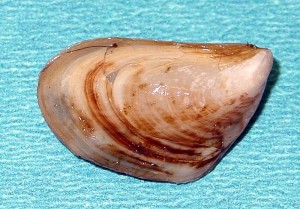 That’s bad news for more than the Park Service. In addition to the recreation area, potential public spots that could be affected by a large outbreak of the mussels are the Rainbow Bridge National Monument and the Bureau of Reclamation’s Glen Canyon Dam.

“Park staff, partners, and the public have worked hard to keep Lake Powell mussel free for the last ten years,” said Todd Brindle, the Glen Canyon National Recreation Area superintendent, in a statement. “It’s very disappointing that mussels are in the lake, but most visitors will not notice them. The important thing now is to keep them from being transported to other lakes and rivers.”

The fact that quagga mussels are in the lake is not a surprise. The Park Service announced early last year it had found more than 150 adult quagga mussels at the Wahweap and Antelope Point marinas in the lake, which straddles the Arizona-Utah border (Greenwire, May 13, 2013).

The Utah Division of Wildlife Resources has also recently detected additional adult quagga mussels in Lake Powell, according to the Park Service.

But as the ongoing drought worsens, and water levels in the lake have lowered dramatically in recent months, it has become clear that NPS has to slow the spread of the mussels that have already caused extensive problems at the Bureau of Reclamation’s Davis Dam downriver on the Arizona-Nevada border.

NPS last month announced a large-scale effort to devise a plan for containing the mussels that have caused millions of dollars in damage nationwide since first showing up in the Great Lakes in the late 1980s.

“We’re trying to figure out what it means and how to move forward,” Denise Shultz, a spokeswoman for the Glen Canyon National Recreation Area, said of the plan that is open for public scoping through March 7. “We’re hoping people will have some ideas and suggestions.”

Quagga mussels, which are native to Europe and Asia, have rapidly become a major problem for the Bureau of Reclamation and its facilities since they were discovered in the Colorado River in 2007. At the Davis Dam, for example, the mussels have blocked cooling valves and overheated equipment, forcing dam operators on at least one occasion to temporarily shut down one of the dam’s five hydropower turbines so the mussels could be removed.

Since being discovered in the Great Lakes three decades ago, where they were introduced by foreign ships emptying their ballast tanks, the mollusks are estimated to have caused $5 million a year in damage in the region by clogging industrial water pipes and causing widespread ecological problems.

NPS last summer used as many as 30 divers with the agency and various state agencies and marinas to conduct diving operations in Lake Powell to determine the full extent of the outbreak at Glen Canyon National Recreation Area and remove as many of the mollusks as possible.

Park Service ecologists say the mussels were able to get into Lake Powell on boats from other waterways that had not been cleaned.

Shultz, the Glen Canyon recreation area spokeswoman, said the Park Service is encouraging boaters to clean their boats and make sure none of the mussels has attached to the bottoms of their boats, helping the mussels spread to other waterways.
Scott Streater, E&E reporter