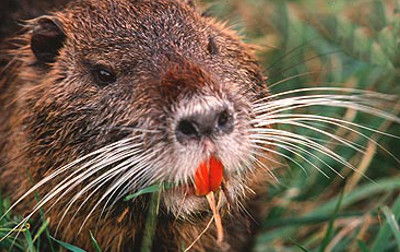 The Nutria (scientific name: Myocastor coypu), which is native to South America, is a very large rodent that was originally imported into Louisiana for the fur trade. Sometimes known as the giant swamp rat, it destroys vegetation and seriously degrades environmentally valuable wetland ecosystems. It has spread along the Atlantic and Gulf Coasts, the Midwest, and is also found in the Pacific Northwest.