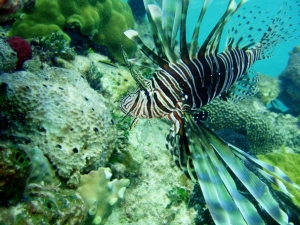 The lionfish (Scientific names: Pterois volitans and Pterois miles) is a beautiful, feathery-looking fish with venomous spines and a voracious appetite.  Florida banned the import of lionfish on August 1, 2014, with fines of up to $1,000 and a year in prison.  Lionfish, a maroon-and-white striped native of the South Pacific, first showed up off the coast of southern Florida in 1985. Most likely, someone dumped a few out of a home fish tank. With a reproduction rate that would put rabbits to shame and no predators to slow its march, the fish swept up the Eastern seaboard and down to the Bahamas and beyond, where it is now more common than in its home waters.

“The invasive lionfish have been nearly a perfect predator,” says Martha Klitzkie, director of operations at the nonprofit Reef Environmental Education Foundation, or REEF, headquartered in Key Largo, Fla. “Because they are such an effective predator, they’re moving into new areas and, when they get settled, the population increases pretty quickly.” The lionfish population exploded in the Florida Keys and the Bahamas between 2004 and 2010. As lionfish populations boomed, the number of native prey fish dropped. According to a 2012 study by Oregon State University, native prey fish populations along nine reefs in the Bahamas fell an average of 65 percent in just two years.

Lionfish first appeared in the western Gulf of Mexico in 2010; scientists spotted them in the Flower Garden Banks National Marine Sanctuary, a protected area about 100 miles off the Texas coast, in 2011. Now scuba divers spot them on coral heads nearly every time they explore a reef. So far, significant declines in native fish populations haven’t occurred here, but the future is uncertain. “It’s kind of this impossible battle,” says Michelle Johnston, a research specialist at the National Oceanic and Atmospheric Administration in Galveston, who manages a coral reef monitoring project at the Flower Garden Banks. “When you think how many are out there, I don’t think eradication is possible now.”